Only the most discerning of caffeine addicted adventurers make the trek to a mysterious Cafe nestled deep in the mountains, but those that do come away with more than just a hot cuppa. Take on the role of the caretaker and enigmatic hipster barista, whose unique and mystical brews enable adventurers from all around the world to delve deeper, grind longer, and do battle with the ancient forces of evil that plague the land.

In Cafe Crawlers you're a mystical barista charged with brewing and baking powerful buffs for adventurer passerbys.  Use the icons on the left of the screen to interact with your patrons, generally you'll be:

- Taking ingredients they've collected on adventures, which you can use to craft powerful foods and drinks.

- Giving them directions to the nearest dungeons.

- Crafting them meals and drinks from your stores.

- Monitoring their progress while on their adventures.

New dungeons are discovered while adventuring, so keep sending your patrons on missions and you'll see new locations appear automatically!

- When an adventurer dies they are lost forever! ;_;  Don't worry though, as a new adventurer will soon arrive to take their place (your barista skills are that enticing!)

- Try and match the attributes of a dungeon with the strengths and weaknesses of your adventurers.

- Buffs from food and drink LAST FOREVER!  There are no levels in this game,  but your regulars will continuously get stronger the longer you keep them alive!

- Take it slow, you don't have to grind the newest dungeons right away.  Patience and farming lower dungeons for ingredients will go a long way in discovering all 20 dungeons, as well as at least one fabulously rare ingredient.  =D

- Really having a hard time?  Okay here's a secret: keep grinding early missions for CHEESE.  It gives you a permanent buff to your health, you can farm hundreds of cheese in just a few minutes, combine it with milk, steak, and spinach and you'll have super buff adventurers ready for anything in a very short amount of time!

Full source code and assets can be found here: https://gitlab.com/game-jammers/cafe

At the beginning seems a bit complex, but a few minutes later that fantastic era gives me a great time. I enjoyed it when watching the adventures of passengers!!

I’m so glad to hear that! I’m actually a fan of this style of game generally, and I really tried to add some features I wanted in a game. It was kind of hit or miss but we had fun trying!

Thanks! It was my first time doing art I am really pleased as punch that you liked it!

We love your pleasant flow too!

Dig the art, the room reminds me of Super Mario RPG on the SNES.

Thanks so much! This was hsmith’s first time as an artist and we’re all very proud of him.

Thanks, glad you enjoyed it!

this game is very enjoyable, love it

Thanks, glad you liked it!

The compatibility of the general components of the game is a very good component. nice game. I like it.

Thanks! This mean a lot for us ! 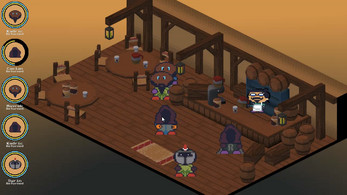 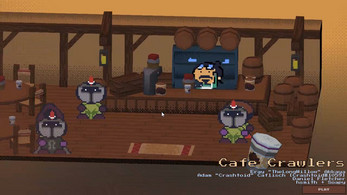 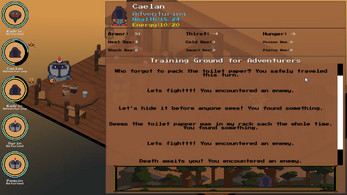